Winter holiday calls for a trip to Lapland!

It’s been an extremely warm winter in Belgrade and even in Helsinki, so North, here we come!

Marko and myself flew from Helsinki to Ivalo and spent a night at a hotel and met up with my parents and bulldog Hertta. Then we drove to Karigasniemi to spend a few nights at our cottage. After a couple of days, it was time to head to Saariselkä, Luosto, Rovaniemi and Kemi.

What you should know about Finland, is that it is a long country and kilometers add up quite easily. Thus, my parents drove around 2000 kilometers in one week!

The flight time from Helsinki to Ivalo is a couple of hours long. Norwegian airlines offers really cheap flights, ours was only 40 euros each. The Ivalo airport is nice and newly renovated.

We stayed a night at the Kultahippu hotel because they have dog friendly rooms and our bulldog Hertta was traveling with us. They have a nice breakfast selection and a la carte menu. We ordered sautéed reindeer, reindeer burgers, goat cheese salads and Marko even tried snails for the first time – surprisingly, he liked them.

There are a few stores and bars around but mainly tourists are just bypassing the area on their way to other destinations in Lapland.

“There’s only a couple of bars and a church but to be honest, even that’s quite ugly”

However, the nature around is very beautiful all year round and there are some tours that you could book from reindeer to snow mobiles.

Karigasniemi – Village on the border between Norway and Finland

Our main destination is Karigasniemi because our cottage locates there. The village is on the border with Norway and it is the northernmost Marko or myself have ever travelled to. 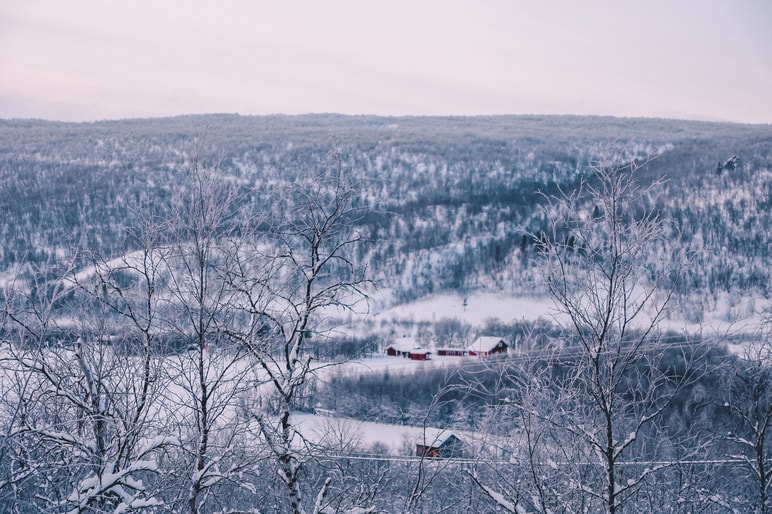 There are no other houses close by. The snow is couple of meters deep and soon after arrival there is plenty of snow work to do.

For two nights, we ate lots of reindeer, relaxed in sauna, played scrabble, opened a couple of late Christmas presents and did some snow walking. We even managed to see the Northern Lights! 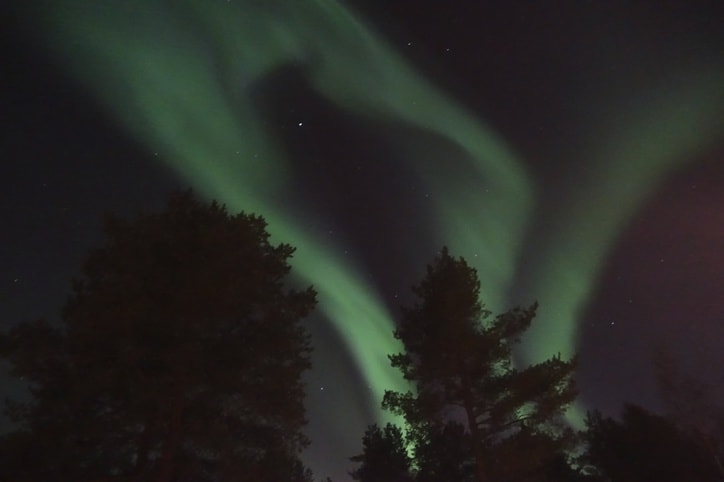 That up north, there is only a couple of hours daylight during the day so you need to plan your activities carefully. In January, sunrise is at 11am, and sunset after 1pm.

The cottage is 25 km from the closest store. The owner is nice, offering all help he can. We inquired him if there were any reindeer farms around. He advised that there was one farm 10 kilometers away and that they have just started to sort reindeer hurdle of 5000 individuals. We rushed to catch a bit of daylight and after a few wrong turns we found ourselves stuck in the snow for half an hour in the middle of the reindeer farm… Luckily, we managed to get out and see a ‘couple’ of Rudolfs. 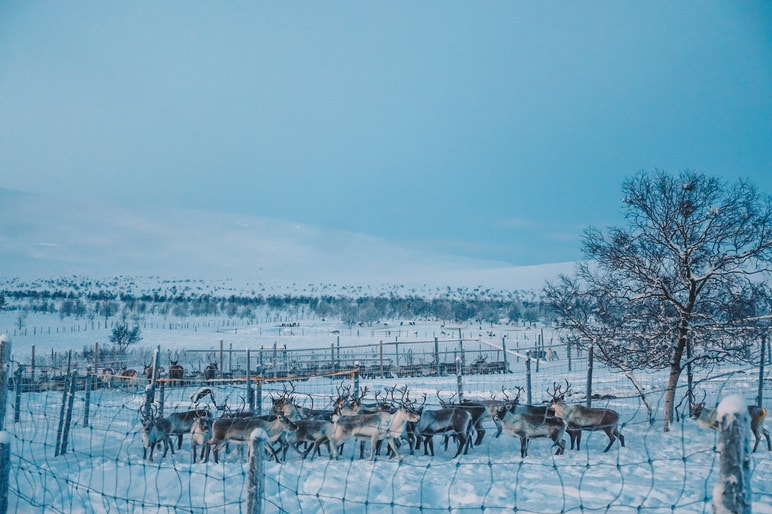 In the morning we woke up to a whopping -33 celsius degrees, it was freezing! This year’s coldest temperature record was close to us, -37 celsius degrees. However, we decided to spend some time outside walking over the snow with our snowshoes.

“Walking with snowshoes was a great experience, I got so into it I didn’t even feel it was -33 degrees celsius!” 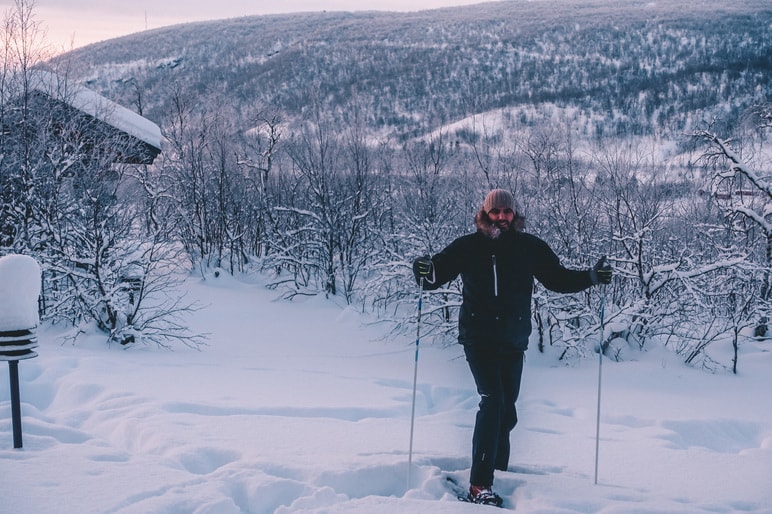 Saariselkä is a resort village with ski trails. Furthermore, it is a great stopover if you are on your way to Rovaniemi (driving towards south, but still in Lapland), for example. The panorama view is incredible, everything is covered in frozen ice and snow. The café looks barely open from the outside, but it is fully functioning. There are lots of skiers and snowmobiles around.

I’m thinking to come back here next year and stay longer, maybe even try out skiing after a decade! 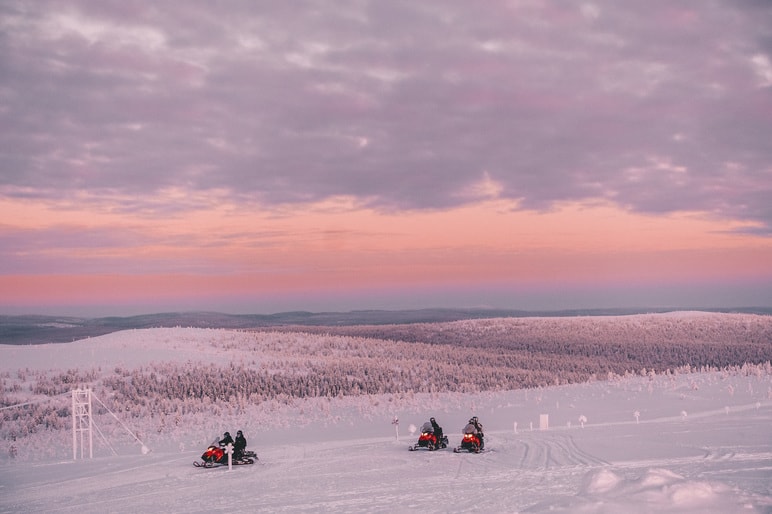 Luosto is a great destination all year round. Besides the activities you can find elsewhere in Lapland, it has a fascinating amethyst mine. You can dig your own gem stone of Lapland, a purple amethyst!

We spent the night at the Lapland Hotel Luostotunturi. It has a spa area with an amethyst pool and the breakfast is worth mentioning – it has a wide variety of foods and Sámi songs playing in the background. That was a very calming morning.

The hotel is pet friendly and they prepared a welcome package for Hertta, with a few treats, towel and a letter with the best walking paths. You can also take you your dog to the bar.

We would have gladly stayed for longer. 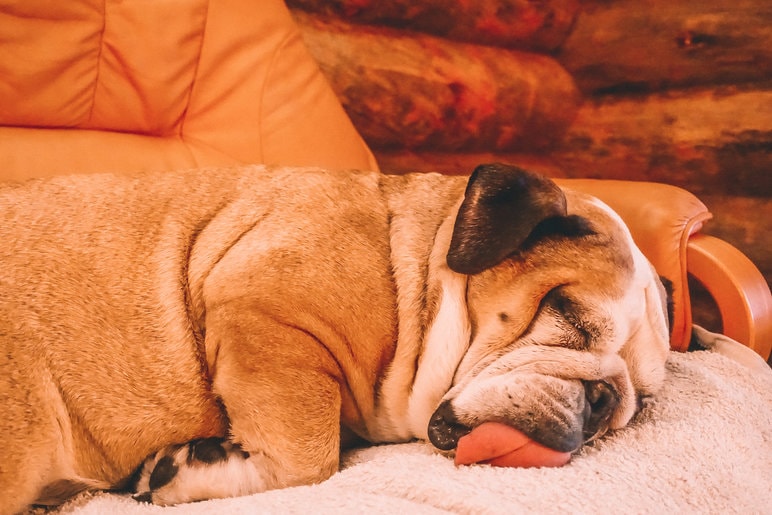 Probably the most iconic place in the whole of Lapland, Rovaniemi – the home of the Santa Claus and the official line of Arctic Circle. It draws in tourists from all over the world every year.

I took Marko here two years ago in summertime, but it is way more magical during the winter months. There is lots to do from riding the reindeer or huskies to feeding them and other animals, snowmobile rides, northern light tours, kids’ parks and restaurants and taking a picture with the Santa. Keep in mind, that even though the village itself has free entrance, all the activities are paid individually and because it’s so popular the prices can be quite high. Whatever the case, it’s still worth a visit! 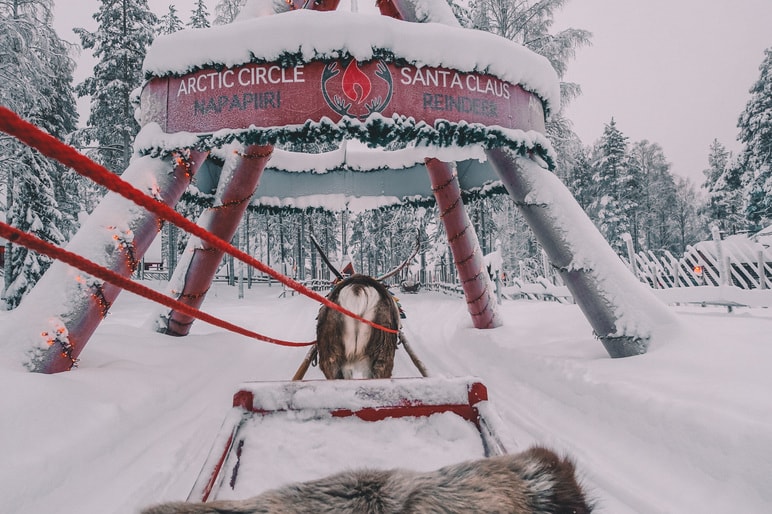 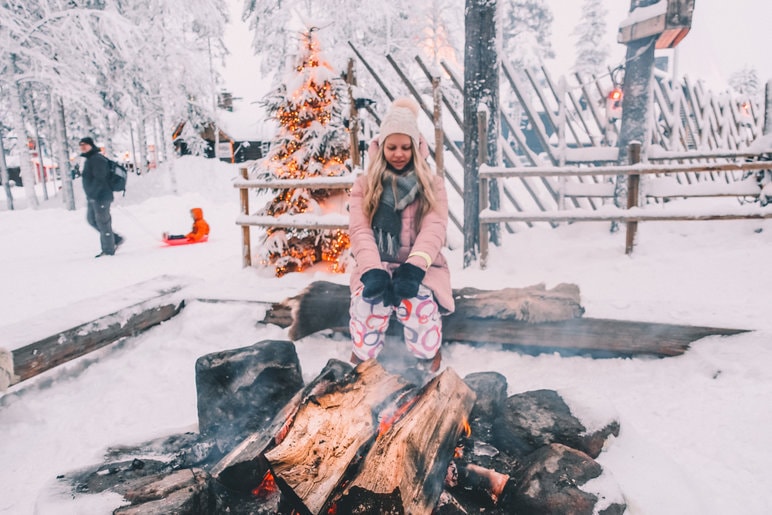 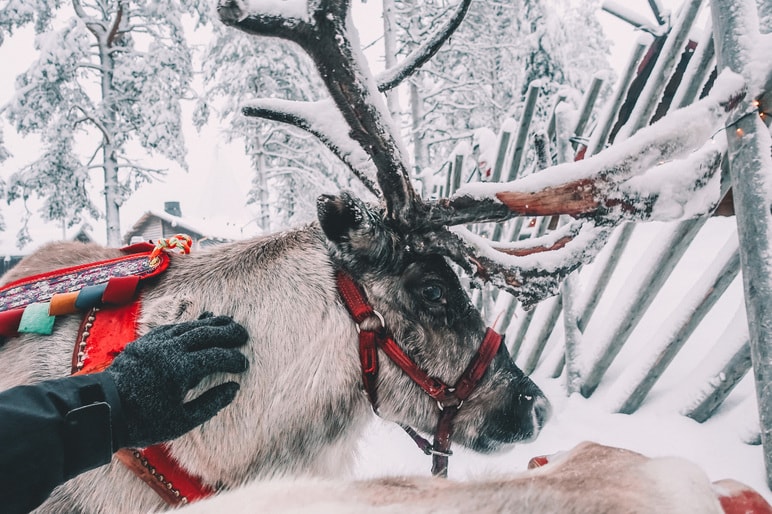 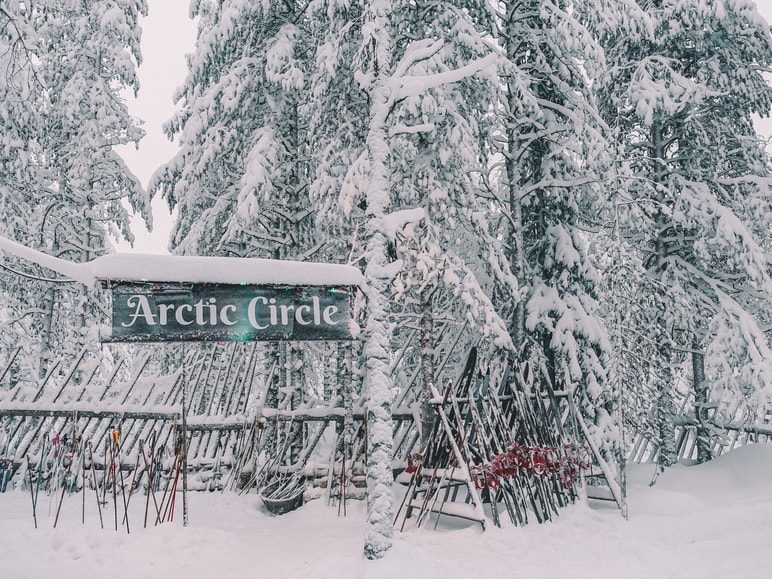 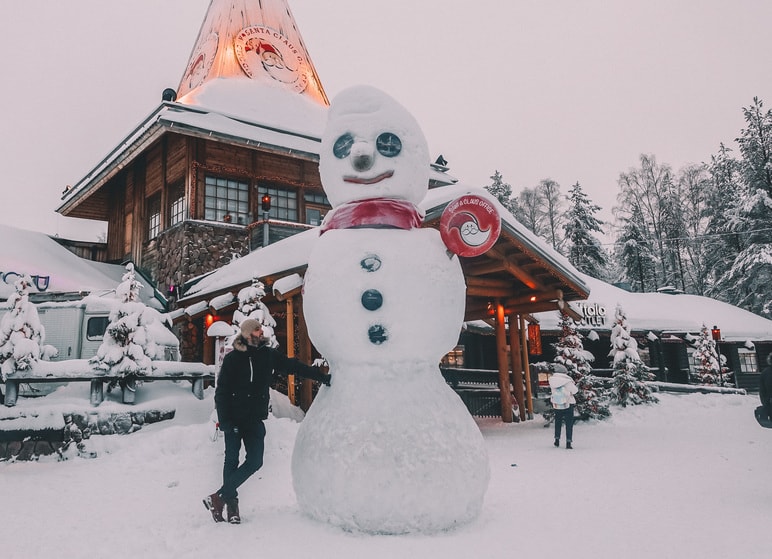 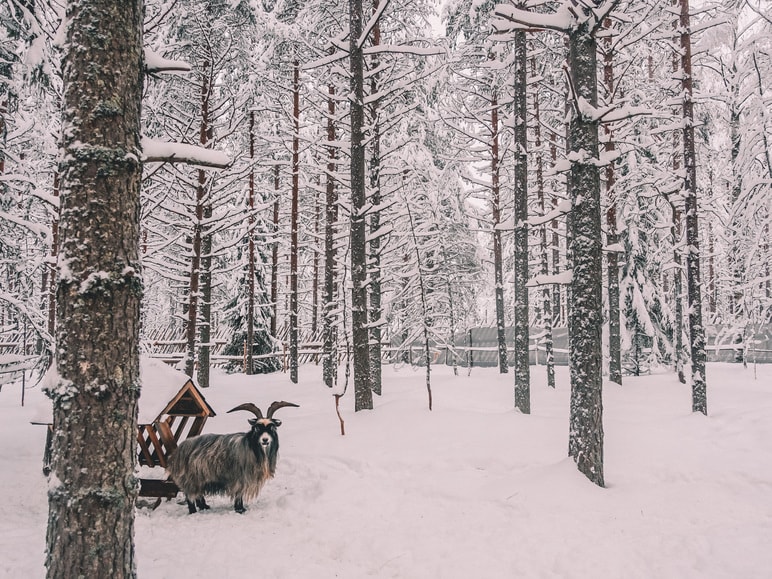 The Snow Castle of Kemi

The Snow Castle of Kemi is the last stop before reaching my hometown Oulu and thus, marks the end for our winter adventure.

Like the name of the place suggests, this attraction is made completely out of snow and ice. It even has hotel rooms and a chapel so if you are looking for an unconventional place to tie the knot, this would be a head turner. However, it is only seasonal and thus, constructed every winter from scratch, so make sure you visit it during the winter months. It is located on the seafront of Kemi next to glass igloos that are available for tourists as well. These were awarded with a Luxury Destination Award in 2019. 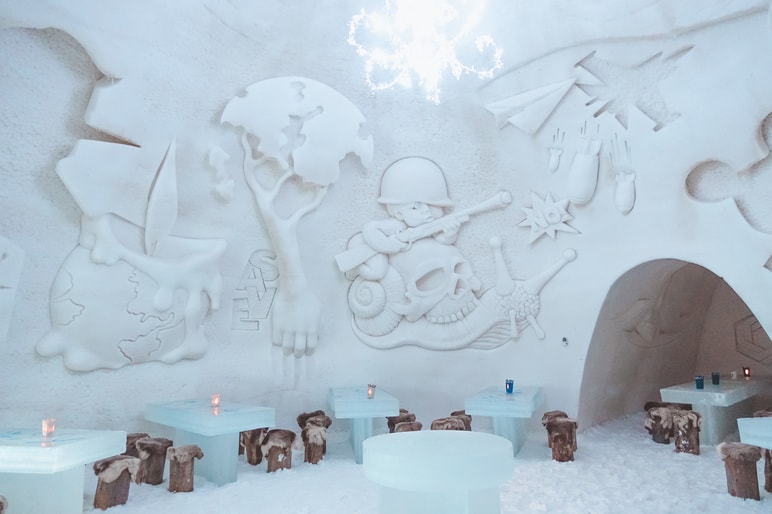 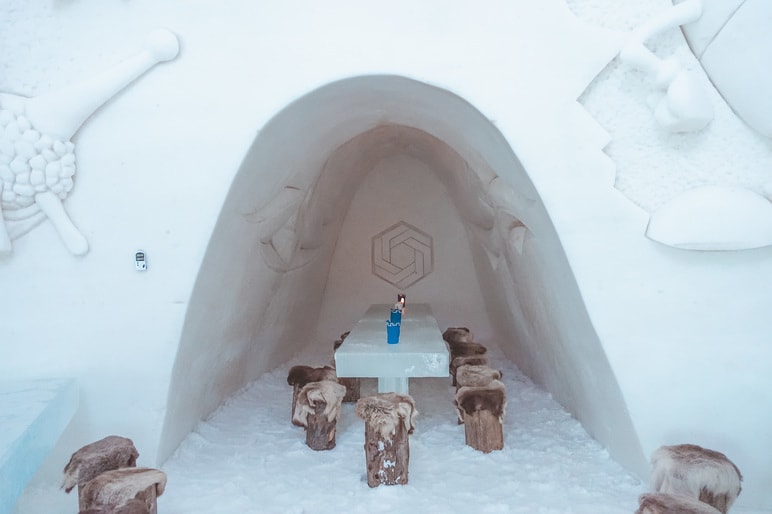 The Ice Castle, however, is indoors and fully functioning throughout the year. The place is beautiful with a bar, restaurant, different kind of sculptures and a slide. It is kept at -5 degrees celsius all year round, so you can still visit this sight during the warmer summer months. 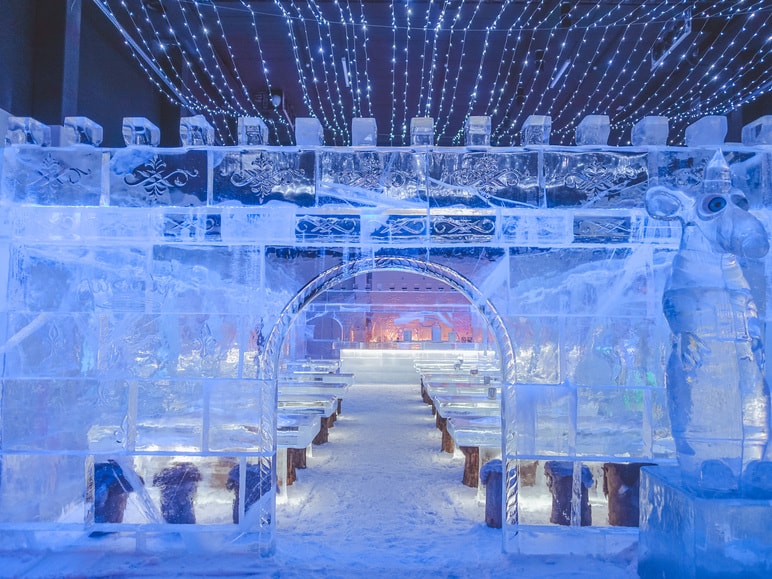 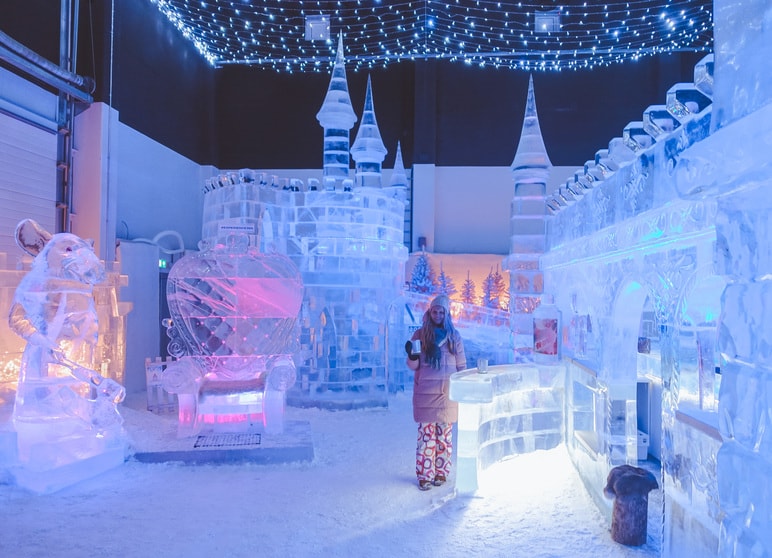 Have you travelled to Lapland yet? If so, let me know your thoughts about the best places to visit, below!

This site uses Akismet to reduce spam. Learn how your comment data is processed. 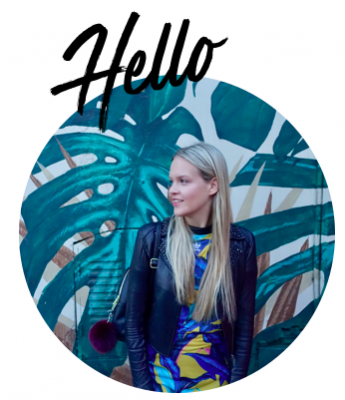 A blog featuring my travels, living and loving abroad, ups and downs on the road, where adventures are always celebrated.

Find out more about me, here.